Major changes to pretty much everything…

The last month, and the last 2 weeks in particular have been taxing. My wife Tonje and I have been planning to  go on our 13 month adventure for about 18 months. An adventure riding around the world on two motorcycles. All the planning and all the gear was in place. Tonje took her license in october 2013, we bought two BMW F800GS, planned, prepared, researched, rince and repeat.. Departure where set to end of july 2014 at the latest. Click on this link for more information on our route and timelines..

DISASTER NUMBER ONE
Then in April 2014, around easter, Tonje fell of a horse-horse and busted her ankle. And people think riding a iron horse is dangerous? Right..
Let me also use this opportunity to mention that Tonje has extencive horse-horse riding experience. She was one of those girls that spent more time in the stables grooming and riding horses than she spent time at home, and that includes sleep-time. Or so I’m told.
Due to our adventure she introduced me to riding horse-horses so that we could expand our adventure in Argentina, Texas and other places. Also, I intoduced her to iron-horse riding, and she unflinchingly joined my adventure dream, so there where not really any way I could decline to at least try out horse-horse riding.
Did I mention that it turned out that I’m a Natural? And yet the pro (Tonje) fell off her horse. Jeesh.. 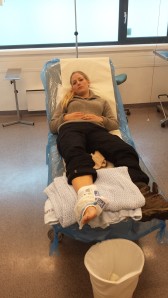 At the emergency room it was determined that she had completely torn off 4 out of 5 ligaments in her right ankle, and rupturing the 5th along the length of the ligament. Also, she completely tore up her pants on the inseam form knee to knee. This made for a few awkward moments while I carried her in to the ER. The stuff you worry most about may very well not really matter in the long run…

The busted ankle in it self was no showstopper,- but it put us back a bit regarding training and preparations.

Tonje has a history with back-problems, spesifically spinal disc herniation. She had surgery for this 2007. The last six months Tonje has experienced increased back pain, and we both suspected a new spinal disc herniation. We have spent the last two months chasing doctors, MRI’s, specialists in Stavanger and Bergen and we even came as far as booking a new round of surgey. Due to this the departure date was pushed one month to septemer 1st 2014. Two weeks prior to the scheduled surgery, a new specialist apointment provided us with a new diagnose; MODIC CHANGES TYPE 1.

This is actually many micro fractures in two opposing vertebraes, that causes inflamation and quite a bit of pain. Some movements and angles has proved so painful that Tonje has had a few blackouts. The biggest problem is that there is no cure as of today. There is an experimentational treatment in Denmark based on large amounts of strong antibiotics over a 90 day period combined with laser-treatment, but its a coin-toss. It was clear to me that this is not a safe foundation for riding a motorcycle for 13 months over difficult terrain…

Dwight D. Eisenhower said: “Plans are nothing, planning is everything”.

I pressed this to heart and decided to suggest a big change in our plan. I still wanted to go on our adventure, but we had to do some serious re-thinking.
Irony has it so that I was worried about her safety and security, and she on the other hand was worried about ruining the trip. She is a fighter no doubt, but I had to draw the line in the sand. First I suggested, then I insisted, and finally I had to make the call for the both of us. The trip will happen, but instead of 2+2 wheels, we needed to go on 4×4.

Then followed two intense days of talks, discussing alternatives and hashing up a new plan.

The two BMW F800GS that I spent 12 months modifying and preparing will be sold ASAP. Click here for the sales ad. Instead we will purchase a Land Rover Defender some time within the next two weeks.

If any car can do the trip we have planned, that should be it. We’ll buy a used Defender, preferably with green plates (2 seater) and then kit it properly in Germany, on the road.

I am still super stoked, and we’re both looking forward to seeing Europe and all of Americas from Ushuaia in South Chile, to Inuvik in Northern Canada. It’s still going to be a marvelous adventure, 13 months on the road (or off the road) with my love. Tonje is having some trouble hiding her delight over a somewhat increased luggage-space. I know she’ll bring more shoes and summer dresses, because after all she`s a woman. And I know there is just no way I can stop her.

On the other hand there will be a lot more room for tools, so I’m not complaining 🙂

We will still atempt to make the planned departure date september 1st 2014.

That being said; they say that God gives you no more challenges in you life than you can handle. Apparently God thinks I’m a Bad Ass.

9 responses to “Major changes to pretty much everything…”

Always searching. The world is my playground.